The History of Jimboomba’s Community Hall

Jimboomba Community & District Hall was originally built in approximately 1930 and located on the southern side of the railway line. It was later moved adjacent to the Hotel on the main road (next to where the current Jimboomba Tavern is located on the Mt Lindsay Highway). It was rebuilt in 1953 after a fire caused considerable damage.

When the shopping centre development was started in 1984, the developer and local community identity, Larry Klinge, donated the land and moved the hall to its new site on the corner of Johanna & Honora St (opposite the current Police Station).

The hall had been run by a committee of community members until 2019, then the committee asked the Rotary Club of Jimboomba to take over the running and maintenance of the hall on behalf of the community.

Since then the Rotary Club of Jimboomba has renovated and rebuilt the toilet facilities, including a new disabled toilet, and replaced fire exit stairs.

With the assistance of grants and in conjunction with YourTown, the hall has been repainted inside and out; bar and storage areas have been moved and renovated; a new and larger entrance has been built; air-conditioning has been installed as has a solar power system. Work is ongoing however, with upgrades to the kitchen and installation of audio visual facilities still to come. 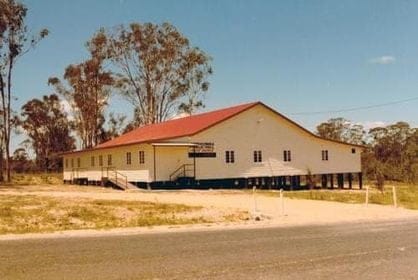 Jimboomba Community & District Hall in 1985 after relocation to current site 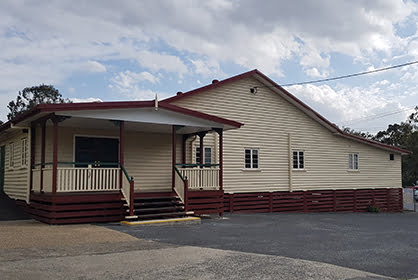 The History of The Little Brown Church

Built circa 1900 in Mary Street Jimboomba, the church was donated to the Rotary Club by the Uniting Church. Relocated in 1999 to its current position the Little Brown Church was restored to its former glory by members of the Rotary Club.

The Little Brown Church was originally used by all denominations for many years for regular services and also for annual “blessings of the crop”. 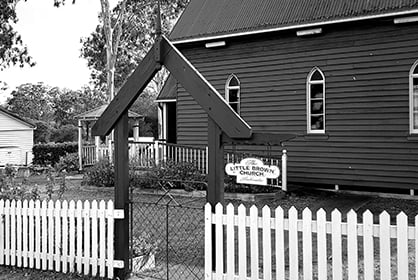 The History of Dorrington House

Built circa 1900 in Queen St Jimboomba, Dorrington House was donated to the Rotary Club by the Dorrington family. It was relocated to its current site in the Rotary Park precinct in 2002. Restored to its former glory by Rotary Club members the house officially opened in December 2006 on the twentieth anniversary of the club.

Below is a letter written by Daniel Begley, a former resident of the house.

My parents, Daniel & Ellie Begley (nee Foley), my bother Patrick (decd.), my sisters Mary (decd.), Teresa and myself lived in Dorrington house from approximately 1920. Before this time, the house was moved to its location in 39 Queen Street by a bullock team, from a site somewhere near where the old store was located.

The house was originally owned and rented to us by the Edmunds’ family, who were also the local shopkeepers. My parents brought the house from them round about 1934. A carpenter from Brisbane who lived in our rear shed during the week and returned home at weekends, added the side and rear verandas’ in 1936.

It is also worth reporting that in the Twenties, Mass used to be said there by a priest from Beaudesert. The priest was Father Steele (later Monsignor Steele and Rat of Tobruk fame) who used to ride his horse from Beaudesert to our place. If the horse became lame, my father, Daniel Begley, would lend his horse to Father Steele who would return the horse when doing his next rounds.

On behalf of the Begley family, I would like to sincerely thank the Jimboomba Rotary Club for magnificently renovating and preserving my family’s house. It now has a place of honour in this wonderful Rotary Park. Not only will it reflect our district’s history, but it will be a very useful community asset for meetings, functions etc. 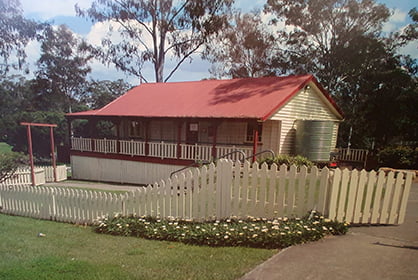